by Duong
in World

“Today is a historic day where two governors are showing how to lead on border issues,” Abbot told a press conference where he denounced President Joe Biden’s easy migration rules and his plan to remove the Title 42 legal barrier on May 23.

Governor [Samuel] Garcia [Sepulveda] and I reached an agreement today … Governor Garcia has begun and will continue enhancing border security enforcement measures on the Nuevo Leon side of the border, both at ports of entry and alongside the Rio Grande River, to prevent illegal immigration …  The Texas Department of Public Safety can return to its previous practice [and] The effect of this will be that the bridge from Nuevo Leone and Texas will return to normal, effective immediately. Right now. It will remain that way as long as the Nuevo Leon executes this historic agreement.

The deal reopens just one of several border crossings that have been clogged by the governor’s policy of stringent safety checks. Abbot says he has begun negotiations with other Mexican governors:

I look forward to working with all of them toward achieving results similar to what we are achieving today with Governor Garcia. Until, however, those agreements are reached with those states, the Texas Department of Public Safety will continue to thoroughly inspect vehicles entering into the United States from every Mexican state except Nuevo Leon.

The El Paso Times reported after the Nuevo Leon bridges were reopened::

[Mexican] truckers continued to wait hours to cross at the Ysleta and the Bridge of the Americas ports of entry in El Paso.

Even after the blockades lifted, inspections continued to stymie commercial truck traffic in much of the borderland, with no end in sight. Trucks waited in line for their turn at two inspection bays at the DPS station exiting the Bridge of the Americas. With inspections lasting 20 minutes or more, the line advanced at a crawl.

“We are seeing delays that will be felt across the country,” John Esparza, president of the Texas Trucking Association, told the Washington Post. “There’s the refrigerated segment of trucking, there’s household goods, forestry, fuel tankers, commodities for trade goods — this is about General Motors, Ford and everything coming out of Mexico, our trade partner.”

This is inflation. Higher prices at the grocery store. A supply chain crisis that is killing businesses along the border.

This is what Greg Abbott is doing to Texas. pic.twitter.com/tvYvAZfAZd

The Laredo Field Office has seen a significant increase in commercial wait times at ports of entry since April 8, 2022, when inspections by Texas DPS began. Hildalgo/Pharr which averages a 63 minute wait time, reached a peak wait of 320 minutes and experienced a 35% drop in commercial traffic. Currently, protests being conducted in Mexico blocking access to the bridge, purportedly over these Texas DPS inspections, have reduced commercial traffic by 100%.

But Abbott is facing down the criticism from business groups and from the White House. 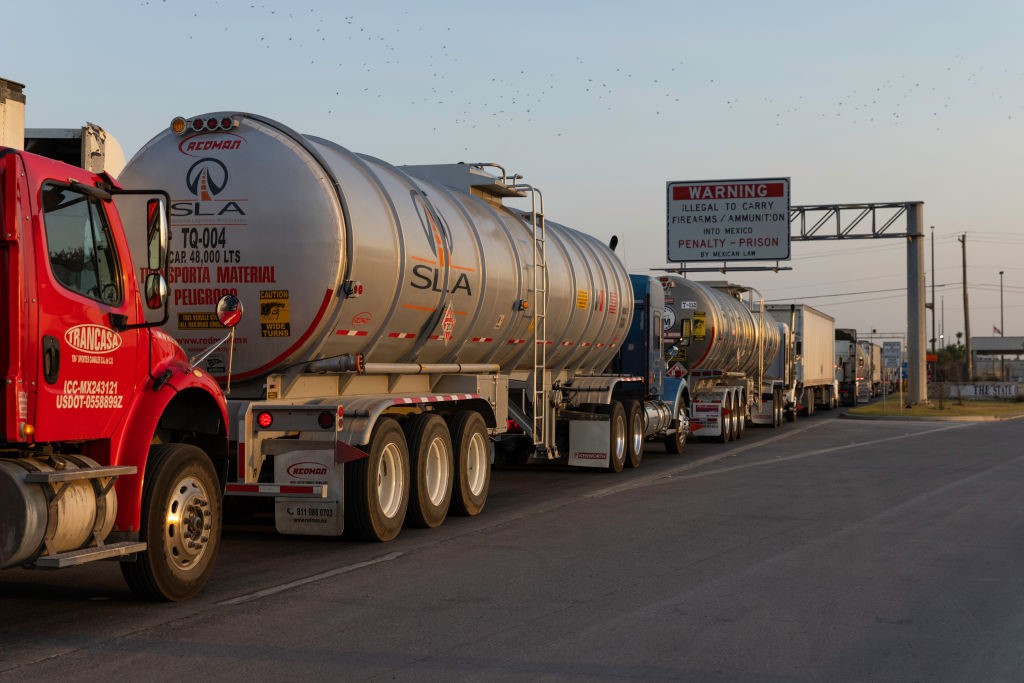 Several dozen commercial trucks wait to cross the Pharr-Reynosa International bridge on April 13, 2022 in Pharr, Texas. The bridge reopened to commercial traffic after 5 p.m. after being closed since Monday because of Mexican truckers on strike. (Michael Gonzalez/Getty Images)

“I’ll also know well the frustration of my fellow Texans — and my fellow Americans — caused by the Biden administration, not securing our borders,” Abbott responded, adding:

The ultimate way to end the clog at the border is for President Biden to do his job and to secure the border. If you want relief from the clogged border, you need to call President Biden and tell him to maintain the Title 42 expulsion policy that has been in place for years.

You also need to contact President Lopez Obrador and urge him to collaborate with Texas to end the influx of cartel activity from Mexico into Texas.

“Clogged bridges can end only through the type of collaboration that we are demonstrating today. Between Texas and Nuevo Leon,” Abbott said, adding, “Until then, Texas will use its own strategies to secure the border and continue to negotiate with Mexico to seek solutions.”

Pro-migration groups — including David Bier at the open-borders Cato Institute — complained about Texas’s efforts to curb the federal policy of extracting migrants from poor countries:

Biden just allowed himself to be replaced as president https://t.co/zDvrBvbzmp

“An explicitly illegal purpose. How is #Biden not suing right now? … Why are truckers not suing? What is going on?” Bier tweeted.

Since at least 1990, the D.C. establishment has used a wide variety of excuses and explanations — for example, “Nation of Immigrants” — to justify its policy of extracting tens of millions of migrants and visa workers from poor countries to serve as workers, consumers, and renters for various U.S. investors and CEOs.

The self-serving economic strategy of extraction migration has no stopping point. It is brutal to ordinary Americans because it cuts their career opportunities, shrinks their salaries and wages, raises their housing costs, and has shoved at least ten million American men out of the labor force.

Extraction migration also distorts the economy, and curbs Americans’ productivity, partly because it allows employers to use stoop labor instead of machines.

Iranian Commander: Death Of All American Leaders Would Not Avenge Soleimani Killing

The assassination of all U.S. leaders would not be enough to avenge the 2020 death of elite Iranian Quds Force commander Qassem Soleimani, a senior Iranian Revolutionary Guards general has said. “If all American leaders are killed, this will still not avenge the blood of Soleimani. We have to follow...

UNITED NATIONS (AP) — Nearly two-thirds of all Ukrainian children have fled their homes in the six weeks since Russia’s invasion, and the United Nations has verified the deaths of 142 youngsters, though the number is almost certainly much higher, the U.N. children’s agency said Monday.Manuel Fontaine, UNICEF’s emergency programs...

President Biden on Monday is set to announce his new nominee to lead the Bureau of Alcohol, Tobacco, Firearms and Explosives after the White House was forced to pull its first ATF nominee in September due to concerns from lawmakers. Mr. Biden will nominate Steve Dettelbach, a former U.S. attorney for...