by Duong
in Cheyenne

Du Quoin, IL — A rock solid scroll of winners, champs, young talent and veterans have already filed their entries for the sixth running of the Shamrock Classic presented by Dooling Machine Products at Du Quoin’s Southern Illinois Center on March 11-12.

One week remains for competitors to file their entries for the event that features back-to-back nights of USAC NOS Energy Drink National Midget racing with two complete programs across two nights with a 40-lap, $2,000-to-win midget feature on Friday night and culminating with Saturday’s $10,000-to-win, 50-lap A-Main for the midgets.

For midget competitors, filing an entry is FREE courtesy of Dooling Machine.  Enter coupon code DoolingMachine to receive your discount.  The cutoff for pre-entries is Monday, March 7 at midnight.  Both Midget and Micro competitors can now enter the event at https://usacracing.ticketspice.com/2022-shamrock-entry.

Thus far, 28 midget drivers and teams have entered the Shamrock Classic, both races which are considered non-points special events for the USAC Midgets, meaning zero points will be awarded toward the national championship.  It’s all about pride and glory with drivers shooting for the pot of gold trophy and the check with their name on it at the end of the night.

Entered in a Dave Mac-Dalby Motorsports machine is Cannon McIntosh (Bixby, Okla.) who scored a Shamrock Classic victory in 2019, which was his first career USAC National Midget victory.  Daniel Robinson (Ewing, Ill.) will drive a familiar No. 57, but this time, it’s for RAB Racing.  Robinson tallied a USAC Midwest Regional Midget triumph at SIC in September of 2021. 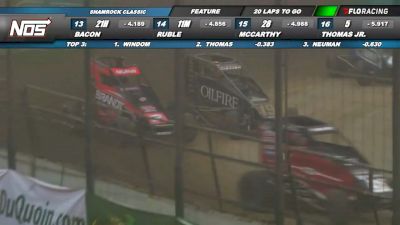 VIDEO: Take a look back at the 2020 Shamrock Classic.

Two-time Indiana Midget Week champ Shane Cottle (Kansas, Ill.) will pilot a Hodges Automotive entry in the Shamrock Classic, with whom he’s competed for in the USAC National Sprint Car ranks over the past couple of seasons.  He’s joined by three-time POWRi Midget champ Zach Daum of Pocahontas, Ill. in a car owned by Harris Racing.

Three-time and defending Badger Midget king Chase McDermand (Springfield, Ill.) will be in one of two Mounce-Stout Motorsports entries alongside teammate Jacob Denney (Galloway, Ohio), a two-time and defending USAC Midwest Thunder SpeeD2 Midget titlist.  Bryan Stanfill (Bakersfield, Calif.), one of 14 drivers to win a USAC-sanctioned feature in four different decades, is back in the saddle of the Griffiths Motorsports No. 75AU along with many more.

On Friday, March 11, the building opens at Noon Central time with the stands opening at 4pm, drivers meeting at 5pm, with cars on track at 5:30.

On Saturday, March 12, the building opens at 8am Central time with the stands opening at 11pm.  The micro sprint drivers meeting will take place Noon, with micros on track for hot laps and heat races at 12:30.  The midget drivers meeting starts at 3pm, followed by hot laps and racing at 4pm.

Shamrock Classic tickets are on sale now at ShamrockClassicDuQuoin.com.  Tickets and pit passes will also be available at the door both days.

One Of The Spice Girls Was In Cheyenne This Week

Cheyenne, WY gets a lot of visitors from all over, but you definitely don't expect someone from across the pond to randomly show up in the capital city, let alone a Spice Girl. That happened this week and they did a fantastic job keeping it low key. It's as if...

Wyoming Has A Stunning Brewery That You Can Camp At Overnight

In our region of the state, we definitely have access to plenty of solid breweries that are well known, not just in southeast Wyoming, but across the state. However, none of our local breweries are a spot where you can camp at overnight. While that concept might sound a little...